As the 5 readers of my blog know, I was unable to fly to Malaysia while on the road last year – because of VOA restrictions on Indian passports. I lost upwards of $500 in the process, and spent over a week moping about it. But I was home last October and during my sojourn, I got the visa and made my way to Kuala Lumpur… and so far, the $100 visa fee has been well worth it!

The first thing you notice as you step out of the airport is a Famous Amos cookies counter and the (extremely humid) heat. But once your body adapts to the heat, and you have a cookie in your mouth, you can start to notice what a lovely city Kuala Lumpur is. I landed in the afternoon, and getting to the central station was a breeze. They have a high speed train that connects both their airport terminals (one for the nicer carriers, and the other for the cheapskate carriers (which people like me fly)), and once you’re in the centre, you can get to pretty much anywhere with their extensive metro service.

My hostel was located in the Bukit Bintang area – which is one of the most happening spots in the city. It’s surrounded by malls, a food street, a party street, a bunch of cafes, and most important of all – a 24 hour McDonald’s. In my first evening I was woken up from my afternoon siesta by some Malay buskers playing a popular Hindi song right under my room’s window. I was irritated, but once I got over the fact that they disturbed my beauty sleep, I took to them and started looking forward to them playing each evening. They have a new set of buskers come in to play everyday, and they play a mix of Malay, English and Hindi songs, and sometimes involve the crowds, when you can shake and dance with them too!

For my first few days in Kuala Lumpur, (including New Year’s Eve), I was joined by Stephanie – who was an absolute joy to travel with. She dances with buskers, buys me Red Bull and even shares a late night beer and shawarma! Can a man ask for more?

We started our tourist trail the right way – by starting with a rest day. We walked around the malls, up to the Petronas Towers, and the KLCC Park.

The following day we made a trip up to the Batu Caves, situated just outside Kuala Lumpur, but easily reachable by their metro. There’s a whole bunch of steps you climb to see what is a rather underwhelming temple, but it’s still a journey worth making. There’s a dark cave tour you can sign up for halfway up the steps to main temple, and there’s even a newly opened Ramayana temple that depicts the story of the Ramayana – and those two, along with the big statue at the bottom, were better than the main temple itself in my opinion. 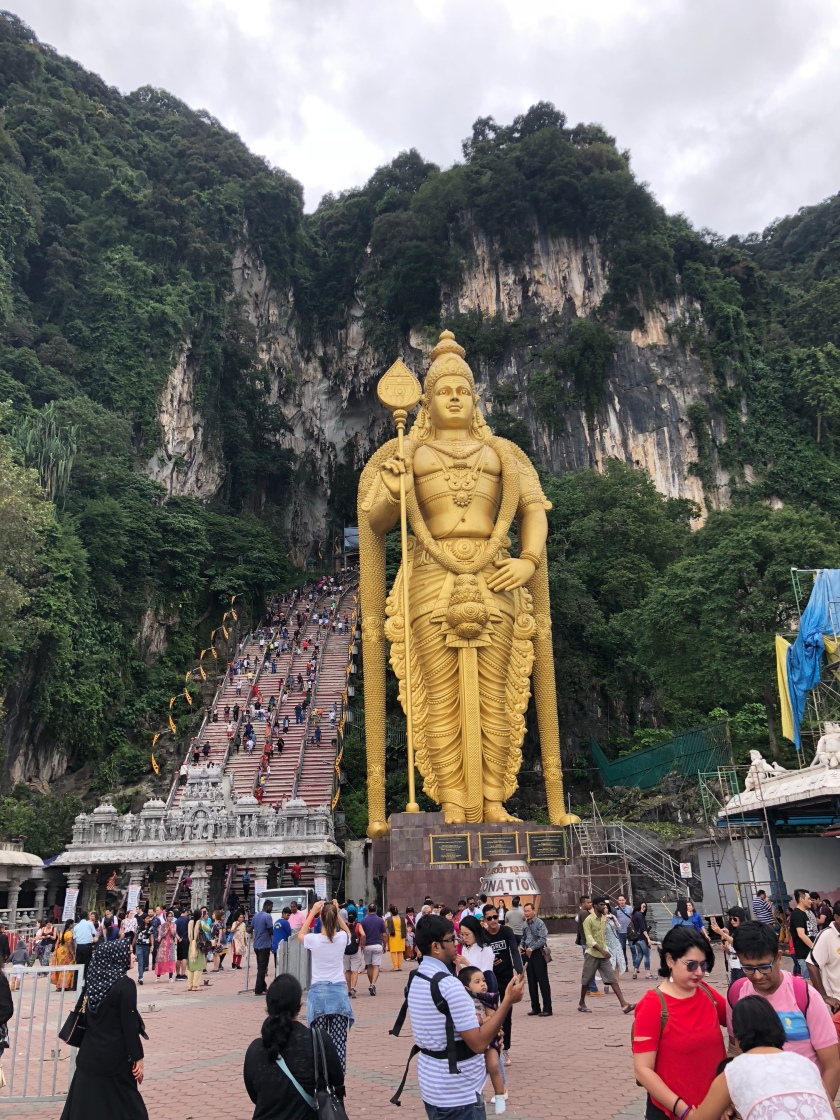 For New Year’s Eve, KLCC Park, which is right by the Petronas Towers hosts live performances and an ‘epic’ midnight firework display every New Year’s Eve – and that’s where we decided to bring in the new year. We started the evening with some sushi, and then settled down with a bottle of wine and some snackies at a quiet spot in the park, just outside the area cordoned off for the performances. Malaysia is a Muslim country, so there wasn’t going to be any alcohol inside the even; but they are extremely liberal, and you can walk with an open bottle of liquor on the streets. Closer to midnight, we made our way to the event area, and it was absolute chaos. The attendees (which were mostly men) tried to push their way to the front, even though there was nowhere to go… maybe getting squeezed up against other dudes is their way of enjoying New Year’s Eve. 90% of them were of south Asian origin – so I guess the pinky walk they do in India translates to straight up grinding in Malaysia! Anyway; the fireworks at midnight were actually pretty epic and I’m glad we picked KLCC Park to spend New Year’s Eve. 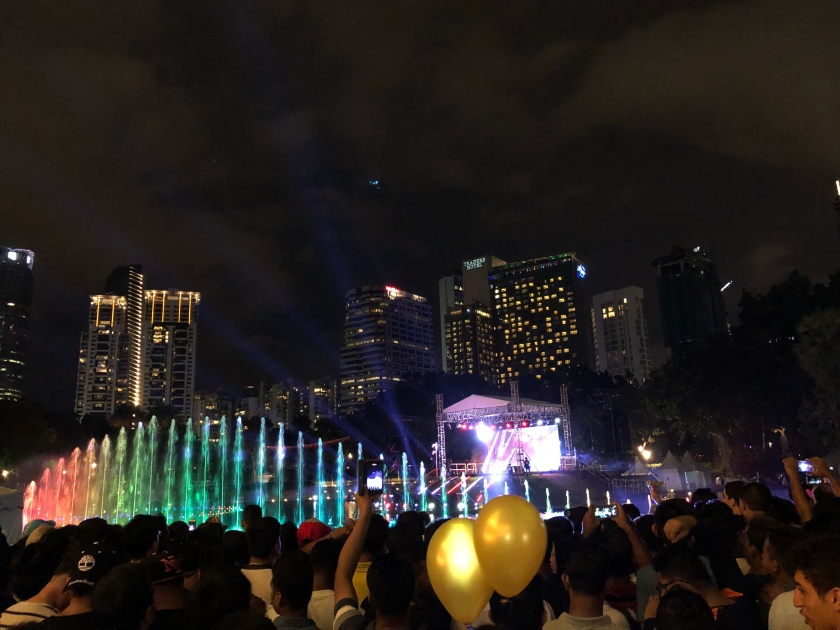 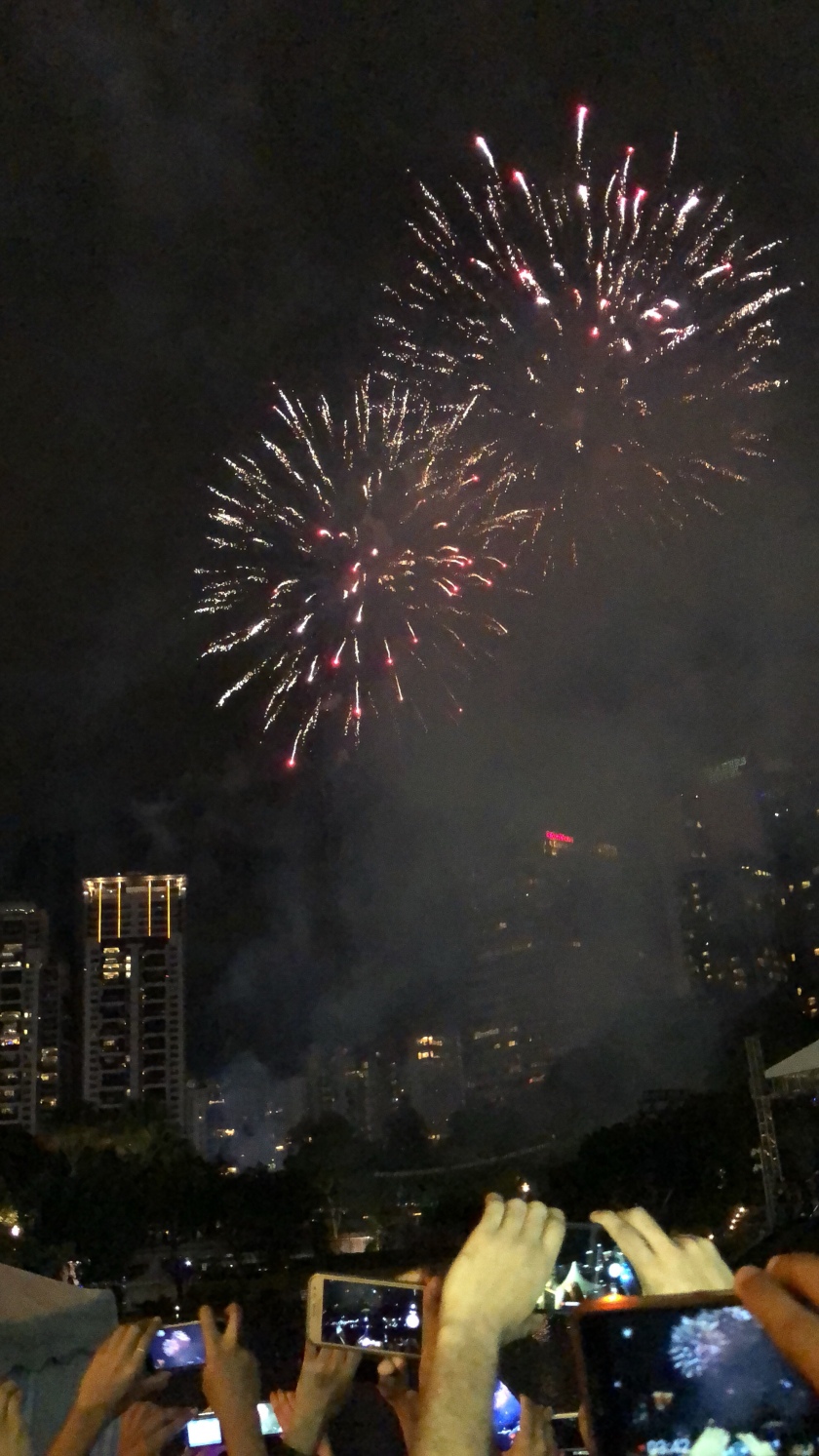 For New Year’s Day we had planned to relax at an infinity pool that was part of an Airbnb we had booked, but then cancelled on us a couple of weeks out. In return for not leaving him a bad review, he agreed to let us use the pool in his apartment complex, and that seemed like a fair trade. However, he didn’t arrange proper access for us, and the guard refused to let us through. After much cajoling, the guard let us get a quick picture, but that is all we got. Can you imagine swimming in a pool with that view though? Argh. Fuck you Vic from Airbnb for taking that experience away from me. 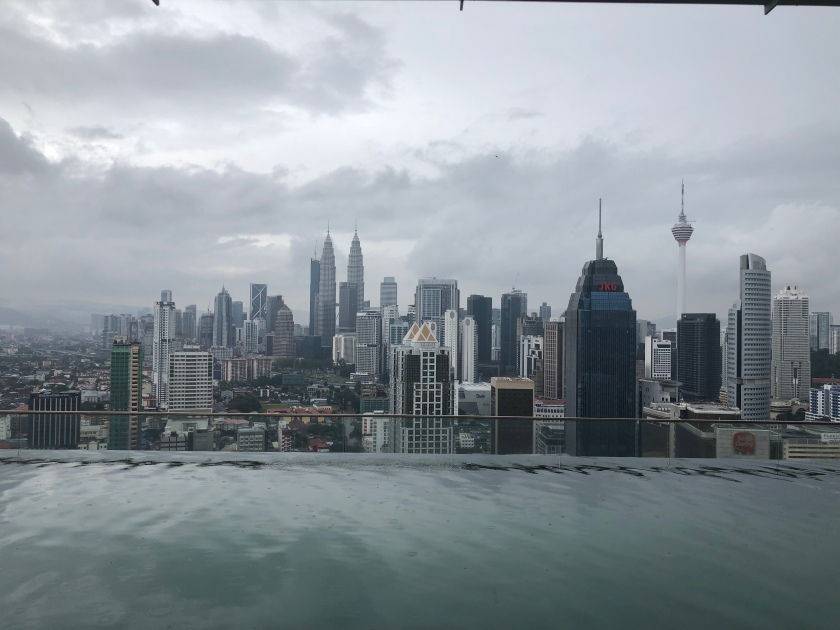 After the infinity pool rejection, we went to the top of the Petronas Towers for sunset, but like every other sunrise or sunset that involves me, it was overcast. The view from the top was absolutely splendid though. 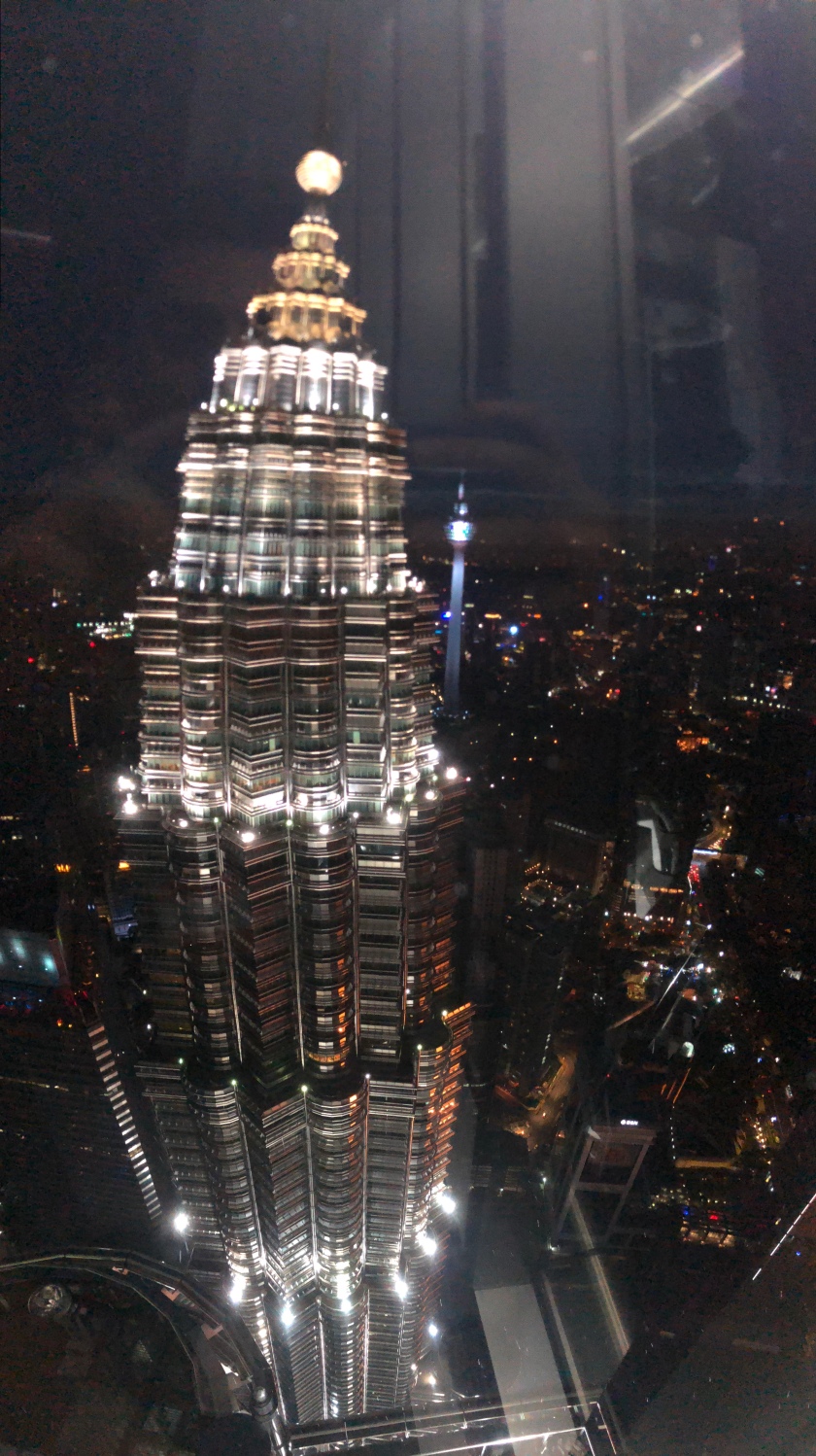 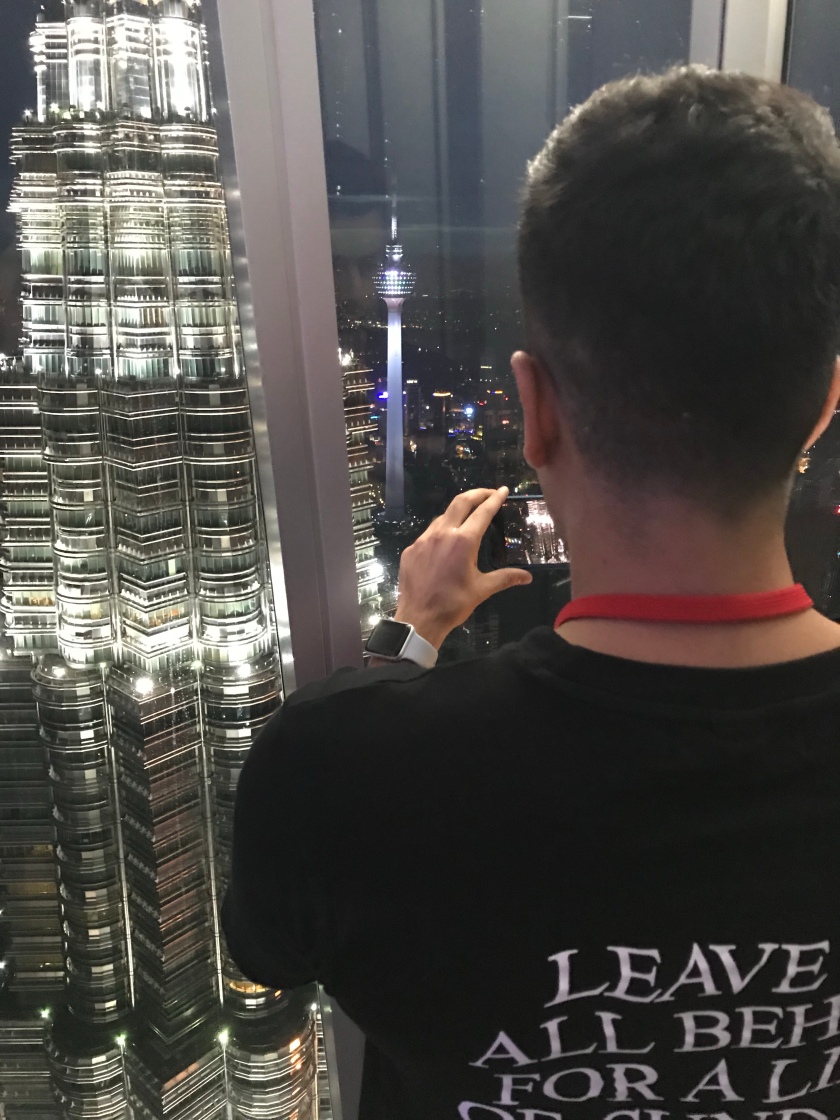 Besides all of that, there’s not much to do in Kuala Lumpur. They have a big square, few mosques and a few museums, but none that really standout or are must-sees. Not for me anyway. There is a nice bar called the Heli Bar – that used to be a helipad on top of a skyscraper – but is now a good spot to watch the sun go down. 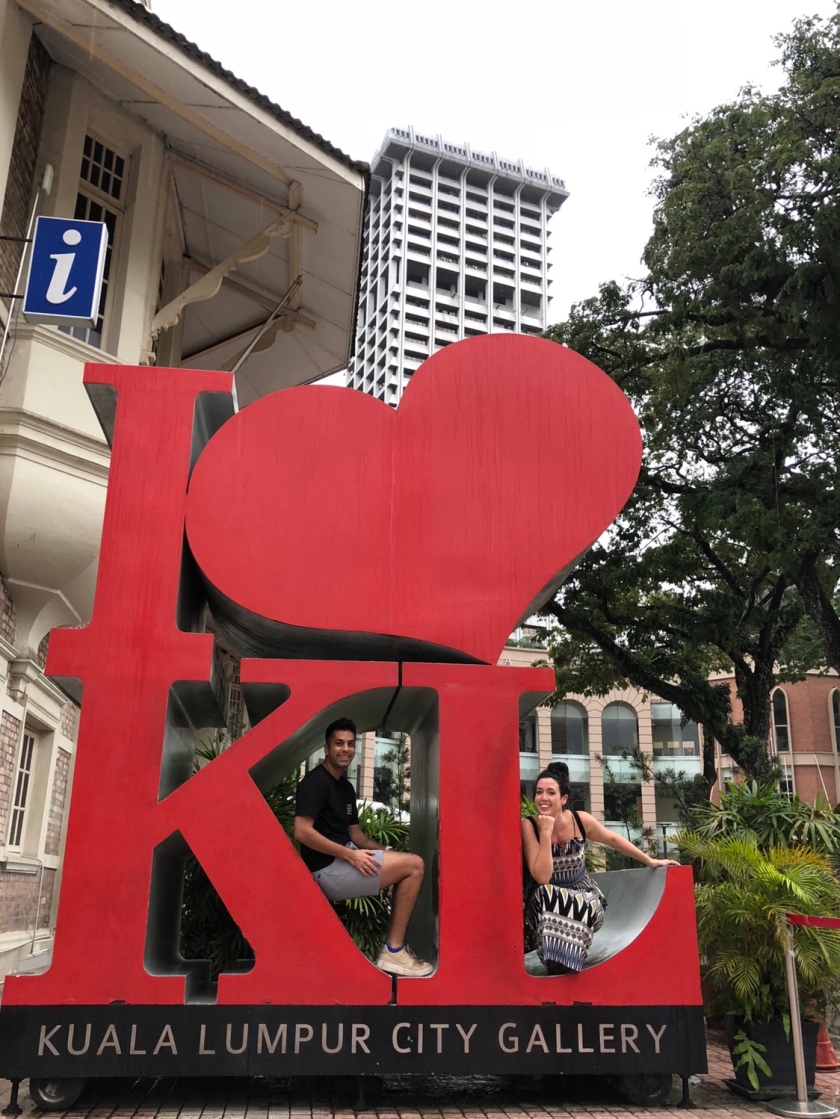 Between all of this, we also partook in an activity most of us enjoy doing… eating.

There’s the Petaling Street in Chinatown, Little India and a whole bunch of food courts within the malls. The famous food street Jalan Alor was right behind my hostel and serves some of the best food from all of Asia. Malay, Chinese, Mongolian, Thai, Vietnamese, Cambodian, Pakistani, Indian, you name it. And all sooo good. They say Penang, which is in the northern part of peninsular Malaysia, has the best food Malaysia has to offer. It’s hard to believe food can get any better than this – but I’m so curious to find out. The whole over eating has also got me 10 pounds heavier in just 10 days… my parents will be overjoyed to hear that. I’m not too pleased though. 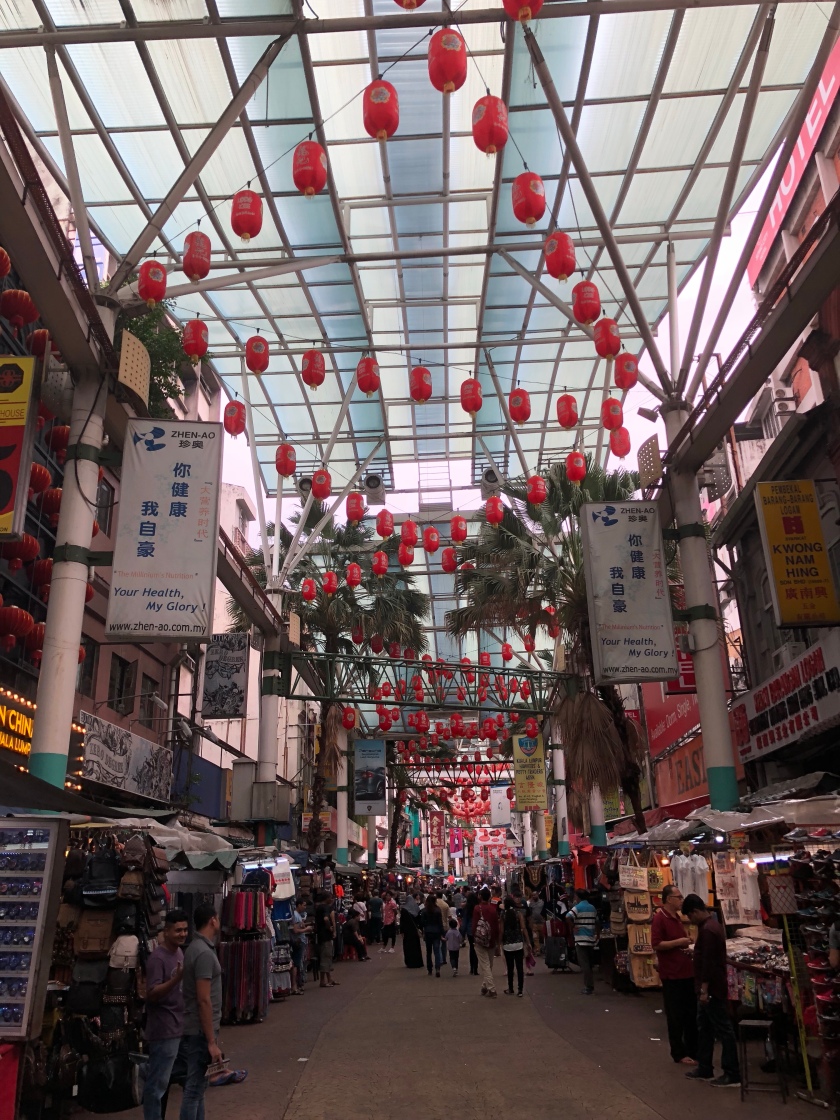 It’s been a year and a half since I ended my travels. In that time, I got a job, quit that job, got admitted to business school, moved countries, and found (what currently seems to be) home. At the end, I never found the right words to cap-off my journey, but reading this book made me revisit the highs and lows, as I found my peace, met the girl I love, and decided it was time to retire my backpack. I still remember the final moments at Charles de Gaulle: looking out at the runway, trying to hide my tears in a crowded airport. I knew that no one ever understood the reason I decided to leave my career behind to travel. I also knew no one would ever understand why I decided to come back. But that wasn’t the point of it anyway. I still have the nomad in me, and one day, I will do it all over again. This post is to thank the friends I made, to be grateful for the experiences I had, and to be content with the decisions I made. For now, I’m home. There’s a paragraph in the introductory chapter that I will end with, “I don’t pretend my story is unique. Many, many people can tell a story like mine - because many, many people have found that the endless loop of commuting and ladder-climbing and evenings in front of the TV (or whatever their culture’s version of that endless loop is) is not enough to satiate their being. Like me, they left; and, like me, they never came back - at least not for a good, long while; and never the same way as when they left.”
Been a month already! #georgetown
One last time. #khaosanroad #bangkok